Next to join the collection...FR 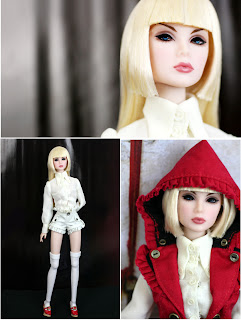 I really discovered the Fashion Royalty dolls when I attended my first IFDC in 2006. I had seen the dolls on eBay, but they looked to me as if they were going into a seizure with those eyes looking like they were rolling back in their heads. Plus they were not as articulated as Momoko and Susie. So I said no to FR.

When I got into the salesroom at IFDC, I saw the new line for 2006. Eyes were much more to my liking and articulations were just like Momoko and Susie. I was smitten and I bought one of each character that I could find. The clothing was fantastic when I actually saw it first hand. Such attention to detail and fabulously couture. Then my friend introduced me to his friend Jason Wu. Very quickly I realized that this young super talented young man was the artistic force driving these dolls. What a super nice person he is too.

Well my FR collection has grown too, but I have put limits on this collection like no other. Due to the fact that there is such a wonderful storyline and so many characters, I decided that one of each character would be the limit. It just didn't seem right to have 4 Veroniques, which one was the real one...would the real Veronique Perrin please stand up. No, just didn't seem right. This quickly became a problem because every year a newer and more beautiful Vero would arrive. So, if I like the newer one, it's out with the old and in with the new, just like a person growing and changing, the dolls in the collection do too. To date the only doll to undergo a change is Isha. I bought the first convention one and then sold her to my daughter to buy the Rare Find Isha. Now I love the Purple Pose Isha, look out Rare Find!!!

Then there are the men, who knows where their loyalties lie, but I think Pierre Devries is for Vero; Darius Reid is smitten with Kyori and Francisco Leon...who knows about him!!! Well all three are a part of my collection now.

Finally, the Dollystyle exclusives that Jason Wu collaborated on with Momolita(Yuri) and Love Sound(Kumi). They are the Fantasy exclusives. Yuri is now part of my collection. She is Red Riding Hood. Her twin sister Kumi will be Wild Wolf Kumi. That's Yuri's stock pic at the top of the page.

So the page at the top is the beginnings of the FR section of my site. It needs to rain around here and make me stay inside and work on the site......alas the weather is beautiful and the pool is calling!!!

Posted by barbigirl at 9:04 AM