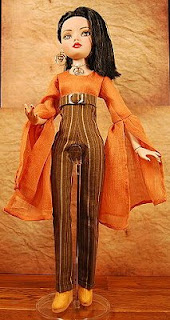 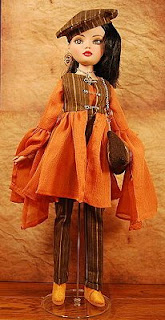 Just want to add a little note to this. I entered this design in the competition at IFDC this year and it won first place!!! See I knew it was good, hehehehe.
Now I thought it was time for my big comeback. I thought about this challenge over and over. I must do something really unique. I looked at fashion sites to see what had been done with Empire and suddenly it hit me. The one thing I didn't see was an Empire pantsuit. That was it, I was going to design a pantsuit in an Empire line.

I loved what I did and I was confident that I was going to win this challenge. I even loved my purse and I'm not great at the accessories side of this. When I showed my family they all said...Wow, best yet. Believe me, my girls would tell me if it was awful, so this bolstered my confidence again. I sent in my photos and waited form my congratulatory email. 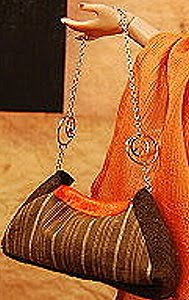 Unbeknowst to me there was a lot of stuff going on in the background of PDW@H. Now I was hearing that some designers were using commercial patterns. Then I heard that another designer was being sent nasty emails saying the doll she was designing for should never have been allowed in the competition. Next I heard that a judge had made some nasty comments to a designer. The only thing I noticed was that if there was a question and I made a comment on it that went against anything the organizer said, my marks seemed to reflect that comment. I thought it was my imagination, but towards the end of the competition I found out that it was not just me.

On this dark side, designers began dropping out, claiming the judging was biased towards "friends" of the judges and organizers. Well it certainly began to look like there WAS a lot of nepotism going on when the scores given to certain designs were so high, while others were so low. Frankly I was happy with the judges at this point. Judge 1 and 4 always seemed to like my stuff, Judges 2 and 3 didn't!!! Sort of a balance. But then I found out that the persons that were suddenly getting the improved marks, had contacted the judges and asked them how to improve their designs..........what the heck, that wasn't fair. So I decided to try. I was given the judges emails and I emailed them and they said absolutely nothing that was helpful.

But I digress.......back to Empire. Judging day came and here were my results:

EMPIRE POINTS: 53 OVERALL: 320
JUDGE 1:
5 5 4 Oh Larraine, this is great! Double Empire? Fantastic. You never disappoint me. Years of schooling have given years of SO much to look at and I have to tell you, that I wouldn't think to put these together, but they go really well! Good Job!
JUDGE 2:
4 4 4 I love the pantsuit idea. Very nice. I think the lower sleeves are a tad bit over exaggerated and when you add the vest part all of the gathers draw the attention to the middle. Love the pants part and the belt at the empire waist. The fit if the pantsuit is really nice. Your collection does have a bit of a commonality to it but you need to keep it together for a more consistent flow.
JUDGE 3:
4 4 5 Good interpretation of empire waist in the vest and the jumpsuit The skirt attached to the vest has the expected loose fit. The pants do not fit that fullness definition, but have an excellent fit. Garments are well crafted.
JUDGE 4:
5 5 4 The pants idea is a pleasant change. You're right I don't see much in the way of "Empire" pants, but you made it work. By using the "Empire" design on both the pant suit and the vest piece, you have doubled up on the "Empire" idea. You did a really nice job hemming all the pieces. I would have probably liked the sleeves a smaller, but then, I think they complement the rest of the look well. Nicely done!

And the winner of this challenge: 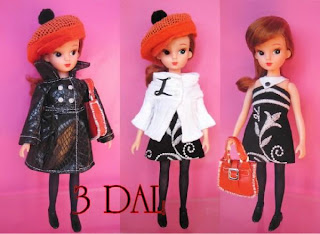