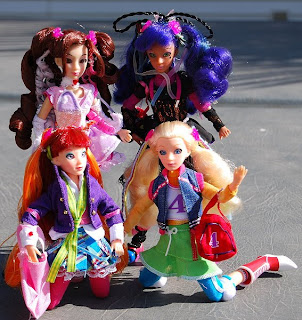 A friend emailed a few weeks ago to say he had found the cutest little dolls at his local Target store. They were called Juku Couture and there were four of them. Of course I scanned the "net" and yup there they were. Cute as a button with very cool clothes, they are reminiscent of the J-Dolls. So I ordered all four of them. (back row Jun(l) and Kana; front row Audrina(l) and Hayley)
They finally arrived this week. They are made by Jakks Pacific. They are about 10" tall, about the size of my re-bodied Mamemomokos on the Volks mini body. They are fully articulated, however the joints are a bit loose, but even that doesn't stop them from standing on their own. The biggest thing I have 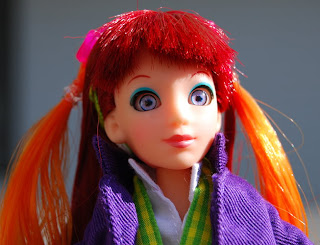 against them are those eyes. They have the "deer in the headlights" stare. If the eyes could be toned down these gals would be really cute. Note the pic of Audrina close up. However they are the right size for the Rement house too and can join the rebodied Mames as roomies.
At approx $20.00 a doll, not a bad price either. The four dolls are Audrina from Los Angeles, Hayley from Sweden, Jun from South Korea and Kana from New York. They are all in their first year of High School. Here is their page: http://www.barbigirl.com/othersmall.htm#juku
Posted by barbigirl at 9:44 AM