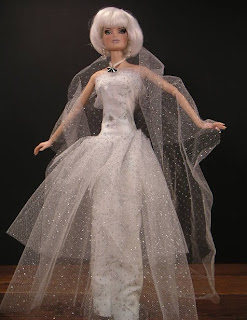 For those of you that don't know.....there is a challenge group called Project Dollway. It is the Project Runway of dolly designers. This idea all began about a year ago with Ted Menten hosting the first PDW. There were a number of designers and it worked the same way as PR with eliminations each week. The winner Andrea Jacques is going to have her collection produced. Running at the same time, the people who were watching at home and were brave enough, could do the same challenges as the designers. I actually did two of them. That's one of them to the left. It was the FR challenge and our keyword was moonlight.
Well after PDW finished, we were out there in no man's land........then tada!!! Gabby to the rescue. PDAH is all about home designers. There are 31 designers. There are no eliminations(thank heavens or I would be out the door the first day!!!).
So spurred on by my outfit winning second place(my daughter won first, sheesh) at IFDC this year and the positive comments of many people who saw the outfit, I entered PDAH.
It will be hectic and I don't know if I will get to document all the ups and downs, but I'll start. There will be twelve challenges, all one word. When we got our first clue...VINTAGE...I really didn't know what to think. I read all the posts on the group list and I still didn't know what to think. I have been thinking and thinking and I have kind of an idea forming, but we only have two weeks to complete the design and sew it into existence. Well I'll give it a try because it sounds like fun and fun is what this challenge is all about according to our fearless leader Gabby!!!
So as to not give away anything, I think we are supposed to post our thoughts on the challenge after the due date for each challenge..........I'd better get a pen and paper, well maybe I don't want to remember some of these thoughts!!! LOL!!!
Here we go..............
Posted by barbigirl at 4:24 PM