More Website work and some knitting and other dolly stuff 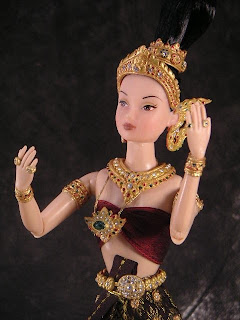 I think I am going to overhaul this whole darned website top to bottom. Now I am re-vamping Susie's pages. Oh well I always said it was a work in progress.
Speaking of which, I am now knitting sweaters in 11.5 and 16 inch scales. I got this pattern for this very cute Christmas tree ornament which is a little sweater. However when I knit it up, it is 1/6 th scale, but the needles they called for were so big, that the stitches are very large, so now I am in the process of re-working the pattern and trying to figure out how to use smaller needles and get the proper size. This is no mean feat as I have actually no idea what I am doing. This will be an interesting project...hehehehe!!!

I got an email from the Sekuguchi website yesterday and the meanings are mostly lost in the translations, but it appears that there is going to be yet another exhibition of Momokos. Looks like this time they are about the history of the kimono and how modern girls are updating the Yukata, Kimono dress and bringing it into the 21st Century. I would love to see that as I do really like Japanese traditional clothing. Really I love all traditional clothing, and I did like the Barbie Dolls of the World that were issued from 1980 to 2000 and now being issued again. I collected all of them and just picked up the two that were issued this year Spain and Indonesia. R&D Fashion dolls put out several beautiful dolls in traditional Thai costumes a couple of years ago with their Legend of Thai series: http://www.barbigirl.com/legendthai.htm
I really am a sucker for dolls in historic or traditional costumes. The picture is Sukothai Muse from R&D's Legend of Thai series.
Posted by barbigirl at 8:14 PM